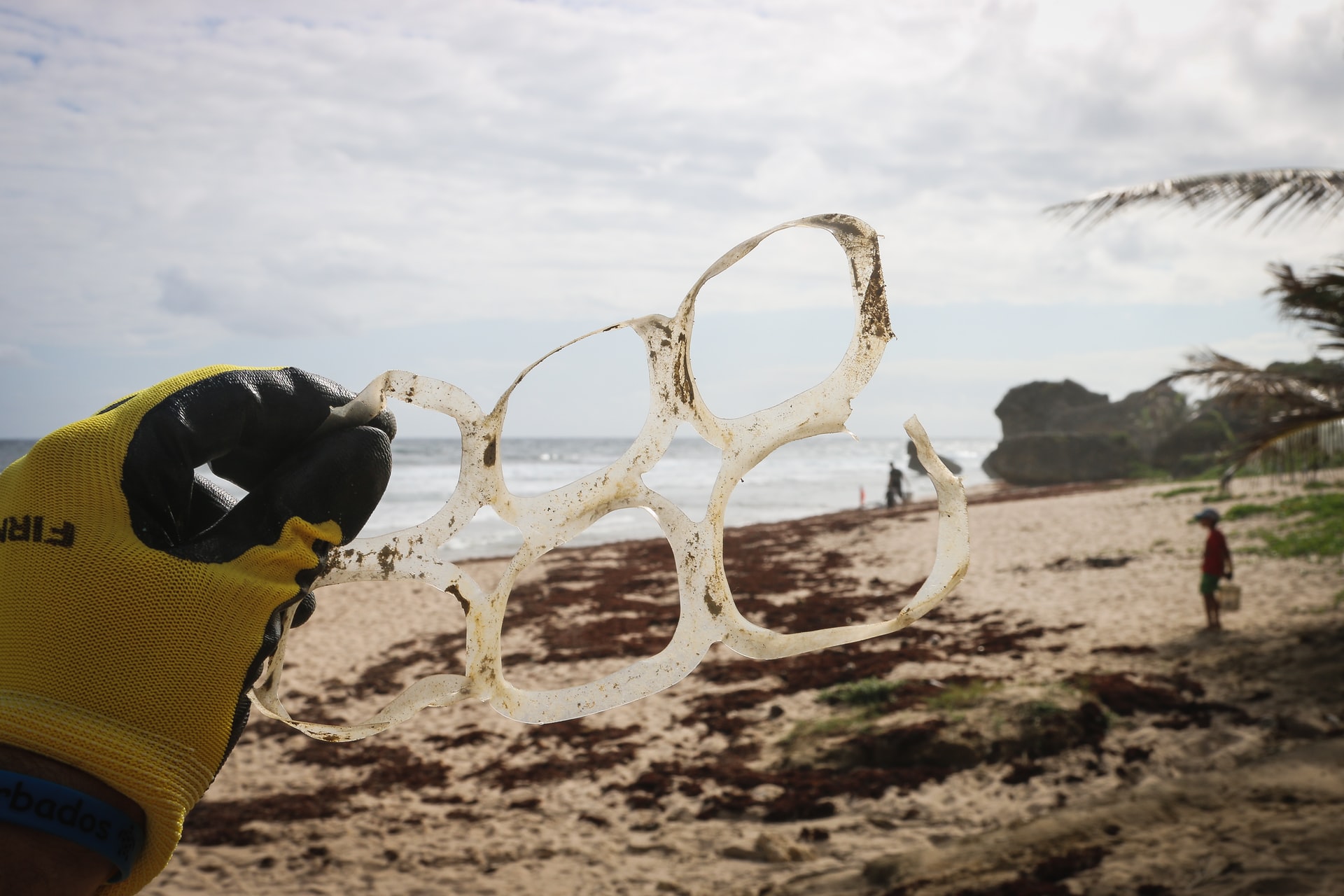 The plastic revolution of the ‘50s came with a hefty price tag that was invisible for decades. The cost? Environmental safety. As plastics began to be produced, it branched off into the microplastic: a small piece of plastic that would eventually snowball into a catastrophic climate disaster. All over the world, the effects of climate change are felt because we simply don’t know what to do with all this leftover plastic.

Microplastics aren’t just one type of plastic. The term microplastic is a blanket word for teeny pieces of plastic that are purposely created to be small or larger pieces of plastic that break down over time. Some microplastics are so small that they’re nearly invisible. But don’t think for a minute that because microplastics are small, they can be digested by stomach acid. Plastic was designed to be long-lasting; it can pass through animals and move high up the food chain. Sometimes it doesn’t pass through animals at all: according to Ocean Crusaders, over one million animals are killed every year due to plastic in their natural habitat. Animals regularly ingest them and choke to death.

Here’s a horrifying fact: it was completely legal to dump plastic in the oceans until the 1990s. Microplastics in water haven’t always been a problem because mass-produced synthetics haven’t always been a problem. In 1912, cellophane was invented and people everywhere loved it. Companies all over the world began racing to produce plastic as fast as they could to meet this brand new, massively adored consumer demand. As a result, the massive degradation of natural ecosystems and marine life only began about a hundred years ago. Just since the 1950s, the Washington Post reports that humans have produced over 8 billion tons of plastic, with less than 10 percent of it recycled so far. As our human population grows, the demand for these synthetics grows. These have toxic results, creating animal extinction, the increase in greenhouse gasses, and loss of natural habitats all over the world.

As long as there is pollution, there will be microplastics

The problem isn’t that plastic doesn’t biodegrade: it’s that plastic biodegrades so incredibly slowly that massive amounts of damage will be done first. Microplastics in water are a huge problem. Simply put, it’s all too easy for large corporations to produce terrifying amounts of pollution when manufacturing plastic products. In 2018, Greenpeace reported that 10 multinational corporations are consistently the highest producers of plastic-related pollution in the world. Manufacturing plastic on such a huge scale just isn’t sustainable: toxic runoff into the environment is unavoidable, the plastic products created turn into killer microplastics, and noxious gasses that the factories produce are lethal.

Microplastics are probably in your favourite skin scrub

Microplastics are purposely manufactured in personal care products like skin exfoliators and toothpaste. Take a look at your favourite skin scrub: does the label say something along the lines of “made exclusively with natural exfoliants?” If not, then it probably contains microplastics. When these teeny little beads go down the drain, two things can happen.

Number one is that the plastic quickly passes through our sewer systems and waterways, ending up in oceans and rivers everywhere. Birds and fish will mistake these teeny floating objects as food, resulting in plastic in our food chain or increased pollution. The second option is that plastic builds up in our drains or municipal filtration systems, resulting in hefty plumbing costs. But of course, even in this case the plastic still has to go to the landfill, meaning it still runs off into the ocean, killing animals or entering the food chain.

As oceanic dead zones increase, so does plastic pollution

Microplastics in water are a big concern for environmental scientists right now. It goes without saying how essential water is for all living creatures. The effects of water degradation are felt by every person and everything. Right now, scientists estimate there are around 400 dead zones in oceans across the globe. These dead zones are spots where life is uninhabitable because the water has become so toxic that no oxygen is present. The main cause of this? Huge amounts of nitrogen and phosphorus leaking from factories into the water. Factory runoff is toxic to marine life.

And the dead zones are only getting worse: as factories rush to produce more harmful synthetics, the toxic waste continues to leak into fragile ecosystems. The Guardian reports that dead zones have quadrupled since 1950. As the dead zones increase, there is less livable space for aquatic life to live freely, resulting in more animals being pushed towards parts of the ocean littered with plastics.

As plastic pollution increases, it becomes harder and harder for both animals and humans to avoid it. Microplastics quickly move through the food chain and end up back in our bodies faster than we know it. Even if you aren’t actively eating seafood, microplastics are virtually everywhere. According to National Geographic, new research is showing that textiles like nylon and acrylic are creating microplastics in the form of microfibers every time they’re washed. The International Union for the Conservation of Nature reports that around 9 million microfibers are released into the ocean after each load of laundry. Microfibers are the microplastics that exclusively come from clothes, and our addiction to shopping is increasing pollution. New studies are showing that the creation of synthetic textiles are causing us to inhale plastic.

The long term health effects of inhalation are still relatively unknown, but the overall consensus is that it can’t be good. Microfibrous material is meant to absorb, meaning that as inhalation becomes more common, we also risk bringing extra air pollutants into our bodies. Carcinogenic chemicals such as BPA also go hand in hand with ingesting microplastics.

Plastics are a product of fracking

Plastic production and fracking are truly two sides of the same coin. The World Economic Forum estimates the world’s production of plastic will double in the next 20 years. Fracking, the act of drilling deep into the ground to extract gas and oil, is overwhelmingly done to fuel the production of single-use plastic items. This is because fracking produces ethane: something that creates a huge load of profit for the plastic industry.

Ethane has become the primary building block in the creation of nearly every single-use plastic on the planet. It’s the process of getting ethane that causes horrific damage to the environment. Fracking uses a variety of chemicals, water, and sand to crack open rocks and soil. This causes oil to flow through a well. Some oil is collected, but it is unfortunately all too common for fracking to create horrific oil spills. This can cause permanent damage to both human and animal life by polluting local water reserves, damaging soil used to grow essential crops. Carcinogenic chemicals are also used in fracking; these chemicals get leaked into the water during an oil spill.

How did it get so bad?

The demand for plastic, and the creation of microplastics by association, only seems to increase with the human population. The environmental impacts of plastic production have only begun in the last hundred years or so. It’s only in recent years that discussions about microplastics and the pollutants they carry began to be taken seriously. During the 1900s, plastic was everyone’s greatest convenience. Naturally, the long-term effects didn’t show up right away. Microplastic pollution has gotten worse over the years because as the demand for consumption grew over the years, plastic became the cheapest and fastest way to satisfy that void.

As a result, it’s nearly impossible to avoid. It’s in our food, our packaging, our water, our clothes, and even the air we breathe. And let’s face the facts: in our immediate life, it’s more convenient toy a plastic-wrapped lunch than carry our homemade sandwich around in a metal lunchbox. Then once we do buy plastic, how common is it to bring the product home to recycle? As the demand for single-use plastics grew, so did the factories that provided them. As corporations began to increase, it became harder to regulate safe disposal. Toxic runoff was produced. Landfills everywhere overflowed into the oceans. Floating bits of plastic began to degrade into smaller—but equally harmful—pieces. Marine life quickly starts to mistake these colourful floating objects as food.

How can we stop this?

Putting plastic in a recycling bin is easy, but it’s easier to ask ourselves to avoid making waste in the first place. Avoiding plastic decreases the demand for its creation. In 2015, President Barack Obama passed a law banning the manufacturing of microplastics in cosmetics. This was huge: North America finally had some sort of regulation on the creation of microplastics. But it’s not so easily stopped.

As individuals, we have the power to support industries producing material that isn’t dumping toxic waste into our waterways. Consider what went into making that plastic water bottle and where it will end up when you’re done. Take a look at what materials went into making your clothes. Reducing microplastics will reduce the amount of plastic waste in general, which is an overall goal when it comes to sustainability. It’s not an impossible task: in recent years, Sweden has created almost a zero-waste system of recycling both synthetic and organic materials. It is essential to consider even the teeniest of pollutants such as microplastics when considering the environmental impact of climate change. They may be small, but the damage done is huge.

5 Tips for a Sustainable Halloween

4 Ways to adapt to the Changing Season with Uppwell

The Rise and Fall of the Plastic Straw